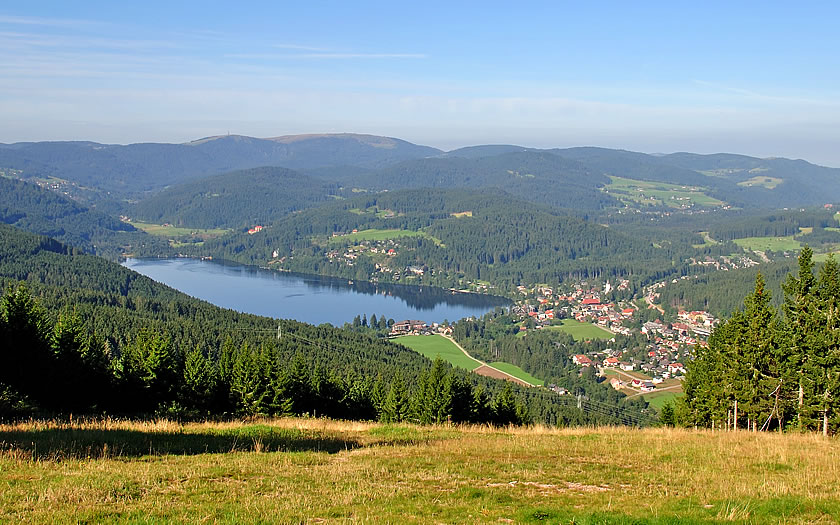 Hiking In The Black Forest

The attraction of the Black Forest on the English-speaking tourist market is primarily focused at the coach tour segment, with trips concentrating on visiting traditional farmhouses, watching how a cuckoo clock is made or sampling some of the Black Forest gateau along the way.

But visitors from the rest of Europe flock to the area because of the renowned hiking opportunities that it offers. And, for Germans themselves, it has historic significance as the birthplace of long-distance hiking trails and the local outdoors organisation, the Black Forest Club, which predated the German Alpine Club by a few years.

Hikers looking for a challenging Black Forest trail might like to try one of the three listed below. They are are not the only multi-day hiking routes in the region but they are possibly the best-known. 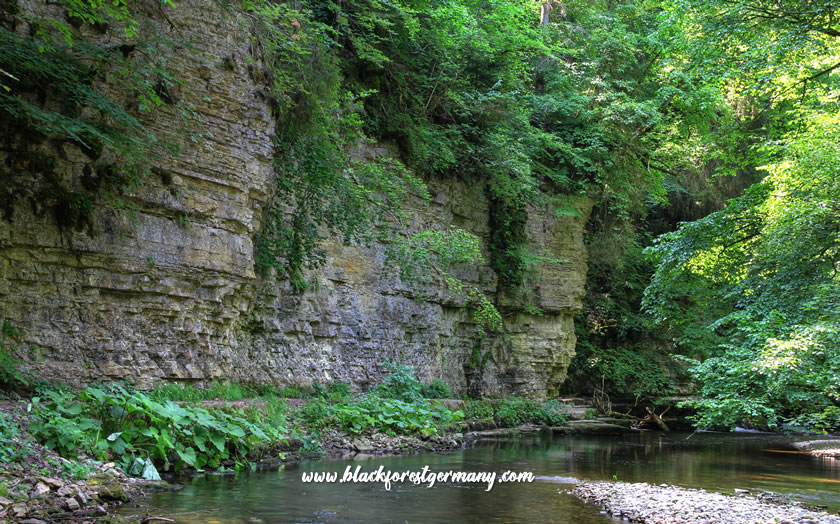 Hiking in the Black Forest through the Wutach Gorge

The walks below may not be as consistently tough or dangerous as some of the more mountainous trails in the Alps but they do require proper equipment, a good level of fitness, a head for heights and a degree of surefootedness.

As the name suggests, this famous Black Forest trail hugs the western side of the region on its journey from Pforzheim in the north to Basel in Switzerland. On its 290-kilometre route (the actual length depends on the variant chosen) the hike travels through the Black Forest National Park and over the Feldberg on its way south. The long-distance walking trail was originally marked out in 1900 and is the oldest one of its kind in Germany.

The walk is split into 12 (west variant) or 13 (east variant) day stages which generally cover more than 20 kilometres. The entire trail has a total vertical of 8000 metres in altitude. The hiking trail splits into a west and east version at Titisee, with the western route heading over the Feldberg and the eastern route heading in more of a southerly direction.

The Central Trail (or Middle Trail, as it is also known) also starts in Pforzheim and is another lengthy north-south hiking route ending up near the Swiss border.

The trail heads via Freudenstadt and the Nagold and Kinzig valleys towards Triberg with its famous waterfall and then south via the Schluchsee to Waldshut.

The route, which is slightly younger than the West Trail (it was marked out in 1903) is split up into nine daily stages varying from 13 to 31 kilometres in length. The total distance is around 230 kilometres.

The Ostweg (or East Trail) is another walking trail that starts in Pforzheim but which this time skirts the eastern borders of the Black Forest region on the way down to Schaffhausen in Switzerland, a town on the banks of the upper Rhine river.

The 245-kilometre route passes through the Nagold valley and Freudenstadt on the way down to the larger town of Villingen-Schwenningen, before curving around towards the Danube crossing at Geisingen and south to the Swiss border.

The Ostweg was marked out at the same time as the Central Trail in 1903 and consists of 12 daily stages, making the daily distance covered a little easier than the previous two options.

This long distance hiking tour in the southern Black Forest combines seven different gorges in a total length of almost 120 kilometres. The walking trail is usually split up into six daily stages of around 20 kilometres.

The Gorge Trail starts in the town of Stühlingen, situated between Donaueschingen and Waldshut-Tiengen and heads into the lovely Wutach gorge before heading past the Schluchsee to the highest point on the hike, the Krummenkreuz at 1148 metres above sea level.

From there it descends to St. Blasien with its cathedral and the Alb river. The walking route heads across the high moorland to the pilgrimage village of Todtmoos before finally dropping into the gorge of the Wehra valley past the castle ruins into the town of Wehr.

Hikes in the Southern Black Forest

One of the main hiking possibilities in the Hochschwarzwald ('High Black Forest') region in the south is also a long-distance trail. The 'Querweg' runs between Freisburg am Breisgau and Lake Constance.

The trail covers 180 kilometres but can also be split up into individual day hike sections and has good public transport coverage with bus services and the rail connection between Freiberg, Titisee and Donaueschingen. 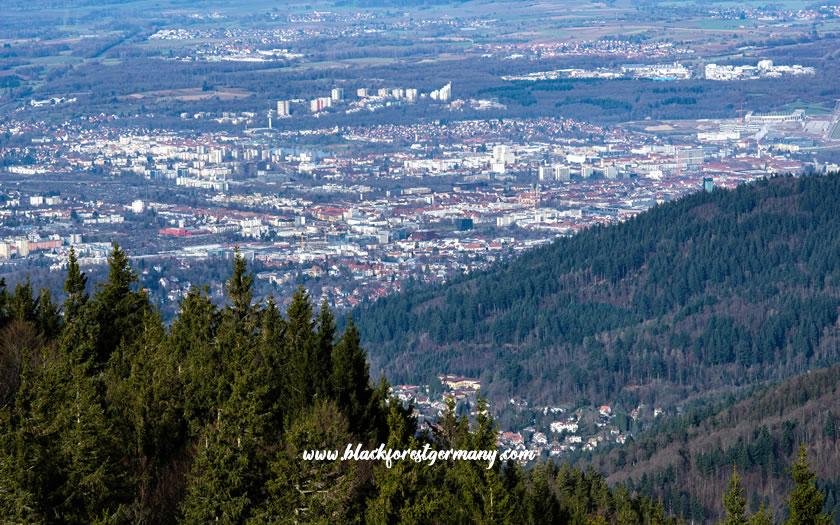 View of Freiburg from Schauinsland

Other walks of interest around Freiburg include the hike back down from the Schauinsland cable car (about five hours and 15 kilometres) and various hiking trails through the nearby wine-producing areas.

Titisee makes an excellent central base for a walking break, with access up and down the train line. There are actually two hiking loops from the town which are designed to showcase the scenic bridges and tunnels of the rail route.

The Feldberg mountain and Schluchsee lake are also easily accessible, while both the Westweg and Zentralweg long-distance trails also cross through the Titisee area.

Blumberg over in the east makes another interesting base, with the proximity of the historic Sauschwänzlebahn ('Pigtail Line') steam train service, the central section of a rail line between Waldshut-Tiengen in the upper Rhine valley and Immendingen.

Hikers also have good access to the Wutach and Gautach gorges, which are featured on the long-distance Gorge Trail.

Further south, the town of Wehr has some interesting walks both north up into the hills and south along the Rhine valley through Bad Säckingen to Murg.

Hikes in the Central Black Forest

The Kinzig valley, with the historic towns of Gengenbach, Haslach and Schiltach, and Triberg, with its renowned waterfall, are two of the best-known destinations in the Central Black Forest region. 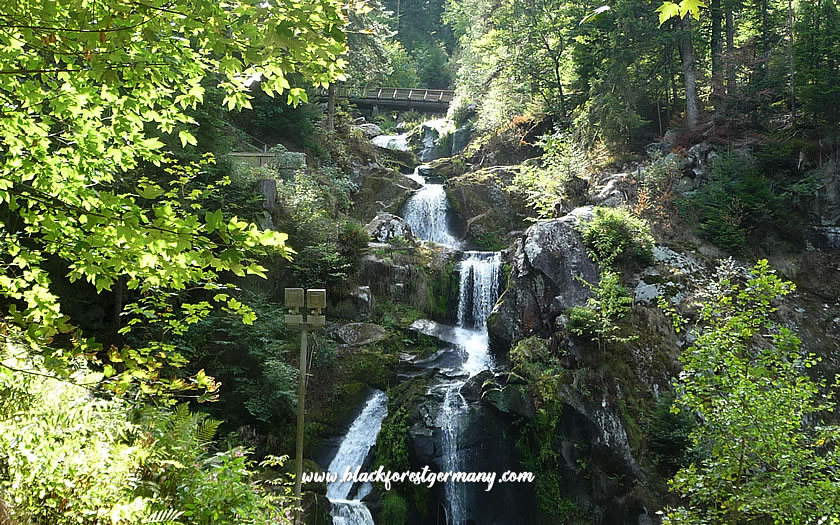 Some of the cascades at Triberg waterfall

The Westweg long-distance trail crosses the Kinzig valley at Hausach, while the entire valley is part of an old pilgrimage route (the Kinzigtaler Jakobusweg) towards Strasbourg and, eventually, Santiago de Compostela in northern Spain.

Any hiker staying in Triberg will take the time to climb one of the routes on either side of the Triberg waterfall, Germany's highest. But there are also other interesting routes towards nearby Schonach or St Georgen.

Hikes in the Northern Black Forest

The Nationalpark Schwarzwald is located in the north of the region (although it covers quite a small amount of what is generally termed the Black Forest) and there are various interesting loops available around peaks such as the Hornisgrinde and the Mummelsee lake. 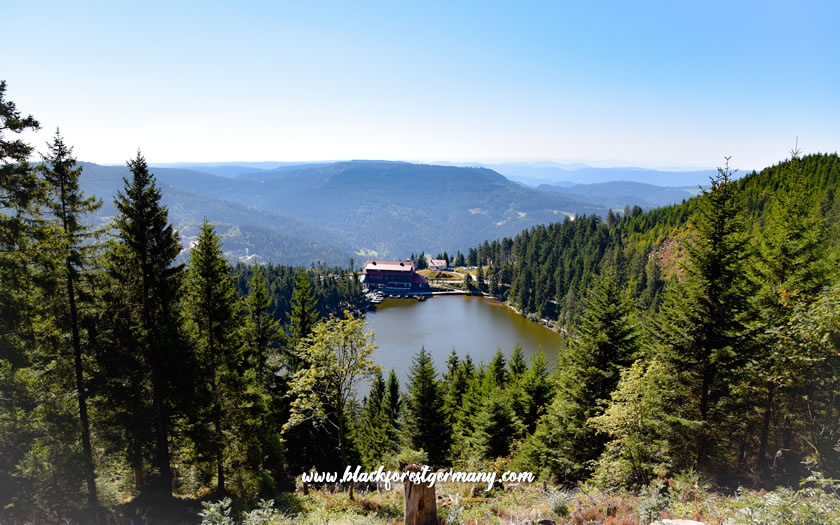 The Mummelsee in the northern Black Forest

Baiersbronn makes a good base for the National Park and any hiker looking for something more challenging might like to try the five day stages of the Baiersbronner Seensteig (the 'Baiersbronn Lakes Route'). The trail, more suited for experienced walkers, covers 80 kilometres and includes most of the sights and lakes of the limestone karst region.

Another centre for hikers is the town of Freudenstadt, which has plenty of easier circuits for day walks, as well as a stage of the Ostweg long-distance hike.